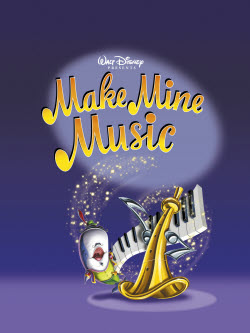 While not every Disney film I've watched so far has engaged me, Make Mine Music unfortunately sits at the bottom of my list. It was boring and seemed to lack any coherent theme; I'm not surprised it was hard for me to track down a copy to watch. As Stuart Nicholson puts it quite succinctly:

Disney tried to emulate the success of Fantasia, but fell far short. The failure of the film is understandable given the state of the studio at the time:

During the Second World War, much of Walt Disney's staff was drafted into the army, and those that remained were called upon by the U.S. government to make training and propaganda films. As a result, the studio was littered with unfinished story ideas. In order to keep the feature film division alive during this difficult time, the studio released six package films including this one. [2]

Due to the war, profits were low, and if the studio was to survive, they had to put something out in theaters. And much like some of today's sequels studios slap together for a quick buck, a Fantasia-like film using popular music seemed like such a solution. 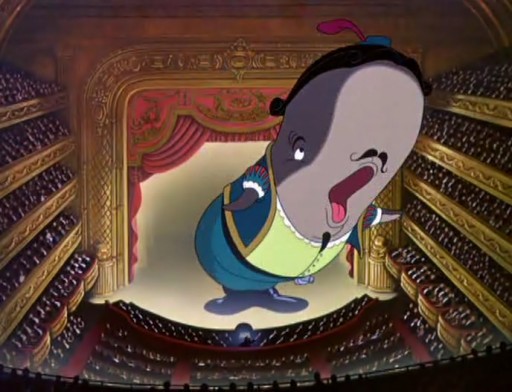 The Whale Who Wanted to Sing at the Met[/caption]

The film consists of ten shorts: "The Martins and the Coys" (which they removed from the DVD release for being too violent), "Blue Bayou," "All the Cats Join In," "Without You," "Casey at the Bat," "Two Silhouettes," "Peter and the Wolf," "After You've Gone," "Johnny Fedora and Alice Blue Bonnet," and "The Whale Who Wanted to Sing at the Met." I wasn't particularly struck by any of them; they even lacked social commentary as with The Three Caballeros. It felt like Disney grabbed spare cartoons from the cutting room floor, stuck them together, and shipped them out the door.

It did what it needed to, as Disney Studios is still here today. The film didn't push any creative boundaries, but it at least furthered the studio, allowing Disney to transform the cinema for decades to come. No, this film won't have a special place in many homes, but it allowed other films to follow, which might be an important enough accomplishment.

1. Stuart Nicholson, "Make Mine Music and the End of the Swing Era," in The cartoon music book, ed. by Daniel Goldmark, and Yuval Taylor (Chicago Review Press, 2002), 125.
2. https://en.wikipedia.org/wiki/Make_Mine_Music