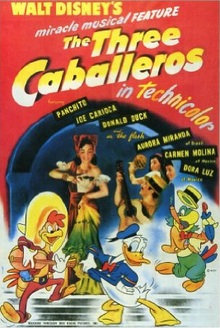 The second installment in Disney's "Good Neighbor Policy" films, The Three Caballeros in many ways picks up right where Saludos Amigos left off. Not plot-wise, as both films were from

…the era of the "package" feature—films consisting primarily of miscellaneous shorts and sequences strung together on a loose and often musical theme. [1]

But the themes are similar. Once again, we have a variety of shorts, introducing Americans to their neighbors down south, exploring different countries and cultures through the eyes of Donald and his friends, José Carioca and Panchito Pistoles. And once again, it is unclear whether the shorts are intentionally propagandistic and demeaning to the countries they are trying to represent.

While not as overtly propagandistic as Saludos Amigos, The Three Caballeros still seems to focus on the aspects of Latin America that citizens of the US would relate to and find appealing. Or maybe it merely simplifies or misrepresents the truth to those watching.

Some of the shorts, such as "The Cold-Blooded Penguin," "The Flying Gauchito," and "Las Posadas" are fun, fanciful tales that educate the viewer without much harm. But others, such as "Baia," "Mexico: Pátzcuaro, Veracruz and Acapulco," "You Belong To My Heart," and "Donald's Surreal Reverie" take things to another level, often having Donald lusting and chasing after women he encounters. When they visit Acapulco, the beach is populated with nothing but 18-22 year old girls, which Donald of course helps himself to, much like he does the singers in Baia. As Eric Galm puts it:

Perhaps this was a "good neighbor" message to Latin America that North Americans were not interested in taking over any countries, but they were definitely interested in the women. [2]

These shorts are full with beautiful women, and the American tourist (Donald) can hardly help keeping himself away from them. In fact,

reviewers were taken aback by the sexual dynamics of the film, particularly the idea of Donald Duck lusting towards flesh-and-blood women. [3]

And soon after Donald finally gets some affection from these women, we go through a "drunk scene" similar to "Pink Elephants on Parade" in Dumbo. [4] 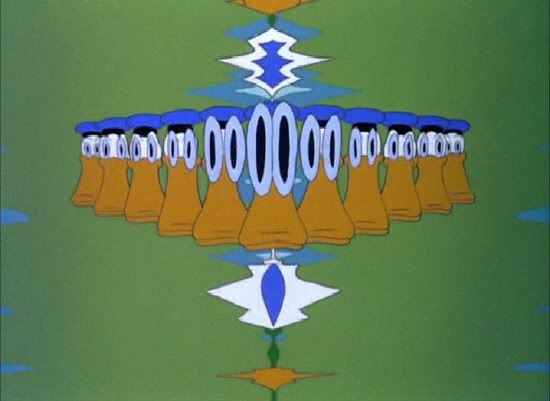 It gets a little crazy towards the end...[/caption]

So while The Three Caballeros might not have been as propagandistic as Saludos Amigos, it certainly misrepresented the countries. I am sure the beaches of South America have men on them too, and that there is more to Brazil than beautiful women singing up and down the street looking for an American to seduce them.

Why Disney chose to focus on what they did is a mystery to me—other that the fact that I'm sure the state department had their hands in the content—but this film is not without merit. It was the "first production to incorporate live actors with animation," [5] which it does very effectively pretty early on in animation history. But can this use of the technology overcome the failings in the content? Perhaps not, as

Most critics were relatively perplexed by the "technological razzle-dazzle" of the film, thinking that, in contrast to the previous feature films up to this time, "it displayed more flash than substance, more technique than artistry." [6]

This much hasn't changed in the entertainment industry almost seventy years later: story comes before all else. Disney may have pushed the boundaries of the medium in this film, but I'm afraid it will always be overshadowed by the damage it did by misrepresenting the cultures of our neighbors down south. Luckily, this film ends the reign of propaganda at the company, and I look forward to seeing what they produced next!