Here goes Michael again… Why does he have to keep doing this? I know he wants to find Walt, and that's fair, but how he goes about doing it isn't good at all! I mean, taking out Locke and locking up Jack? Is he seriously planning to do this alone? He's been listening to the computer and is walking into a trap, I can just feel it!

But this episode isn't about Michael. It's about Jack, and his incessant want to fix things. He always feels that he has to fix everything, and he's a man who strives to do miracles but doesn't believe in them himself. He strives to fix anything and anyone, but in doing so often neglects himself and those around him that he loves. He lost his wife because of it, and she was his first miracle! How can he do that? 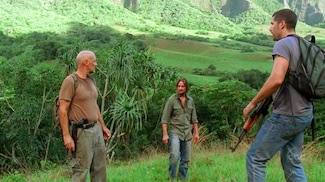 We see it again now. He goes tearing off after Michael, trying to help him to see the truth, that he doesn't have to do it alone and that this isn't the best way to save Walt. But he doesn't stop to think if Michael wants to be stopped, or even what a better option of finding Walt would be. All he is focused on is stopping Michael, and for what? Because it's not Jack's plan? It doesn't seem to make much sense…

Either way, they're stopped by the real "Others," who apparently aren't too keen on these new visitors of the island. Jack is once again forced to face that there are stronger powers at play, that he can't control everything. And I think there is something to this that we all struggle with. How often do we think when we are right, that we need to get others to see things our way? I wonder if the island will continue to work on this with Jack, if he will ever be free of his self-destructive drive to fix things he can never fix. I'm not sure, but I think eventually Jack is going to have to face that he can't simply will everything to happen, that he can't change every event. The island is already forcing him to realize that, but I wonder what it will cost him before it truly sinks in.