The hatch. What is it's purpose? Is the group too trusting of what they have found? It seems that regardless of what help it has provided them, they don't know enough about it. Perhaps Henry Gale is right when he says they should be asking more questions about what they find on the island (as much as it pains me to say he may be right about anything). In this episode, the hatch goes into lockdown, though we don't know why. For some reason it blocks off the living area from the rest of the hatch, perhaps for protection? It's not clear why, but someone has made it a point to draw a map of some sort (I assume of the island) that we get a glimpse of during lockdown. Locke was the only one who saw it, but perhaps he will be able to figure out what it means. 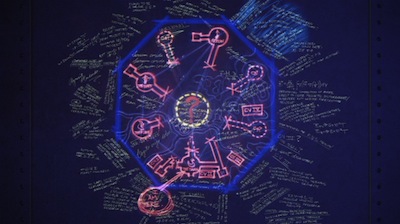 And thanks to Locke, the Henry Gale saga continues. Locke lets him out of the safe to help lift the doors up, and then has to place all of his trust in Gale once he's hurt. We're not sure if he actually used the numbers in the computer or not; he said he didn't, but he's also a pathological liar. If he is telling the truth though, what does that mean about the function of the hatch? Ana, Sayid and Charlie discover his balloon, and that the real Henry Gale was the man buried in the grave. So who is this man who claims he is Henry Gale? Unfortunately for him, since his lie is unraveling we may not get a chance to find out, because Sayid is really looking for someone to blame.

So where do they go from here? They have a hatch they know very little about and could do more than simply just drop doors next time. They most likely have a spy among them who seems ruthless enough to do just about anything to harm the group. Worst of all, no one trusts each other and everyone is more worried about who has power than how to best use it. Whether or not "Mr. Gale" gets his way, if the leaders of this group don't learn to work together, it won't matter. Here's to hoping for the best!