This episode we're back to Charlie and his heroin addiction. It's hard to tell if he is still using or not… He says he isn't, but he's having these weird visions and dreams… Locke certainly doesn't trust him, but part of me wants to.

He repeatedly receives these visions telling him that he needs to save Aaron, but the only person who seems to be putting Aaron in danger is Charlie. Still, with all kinds of weird stuff on the island, any foreshadowing like this doesn't bode well. I'm wondering if this will pan out in another episode, if Charlie will be vindicated. Either way, he certainly isn't going about this the right way. His wish to prove himself is only losing what little trust people still have in him, which isn't good when people now see him as a druggie who steals babies in the night. Oh Charlie, I always have such hope for you, but then you go off and do this sort of thing! 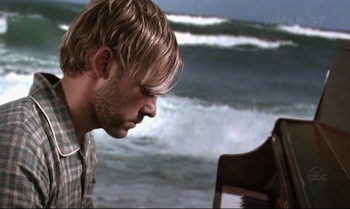 I wonder if there will be any mercy for Charlie. Locke has gotten to the point where he's willing to punch Charlie, so it doesn't bode well, but perhaps this will change over time. Charlie points out that the island tests everyone, and that he is going through his test now. Just like Kate a few episodes back, Charlie is wrestling with his past to discern how to move forward. The island is providing him a chance to make a better life for himself, to choose what is right and not spiraling down again. Will he be able to take this opportunity? Looks like another episode will have to let us know, because Charlie appears to be failing now.

For some reason, I keep rooting for Charlie, and I really hope he can turn around. I'm sure he will eventually be given the chance to prove himself as a helpful and necessary member of their community. I just hope that when that opportunity comes, he passes the test.