Hugo is in charge of the food in the hatch. He doesn't want the job because he's afraid everyone's going to hate him. So, against Jack's wishes he tells people about the secret of the hatch and ends up passing out the food. He decides there doesn't always have to be secrets, and that keeping things to yourself, though it may be for good intentions, can often hurt those you care about the most. These things must be shared.

But maybe that's not always true… Sun seems to think that some things are better left unsaid. Claire found the bottle from the raft, seemingly telling them that those on the raft are dead, that hope of rescue is lost. She gives it to Sun to decide what to do. Instead of telling everyone though, she buries the bottle, keeping the others from knowing the sad reality. She's allowing them to still have hope, though it seems all is lost. And maybe even, by burying the evidence, Sun is allowing herself some hope. Perhaps the bottle just fell off, and Jin is safe. She has no way of knowing, but she decides to hide the facts she knows for the sake of hope and the others. 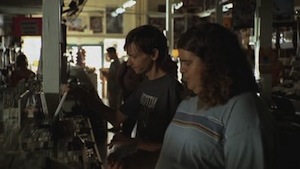 Hurley just wants everyone to be happy[/caption]

If she's lucky (which we know she is), she will be like Rose, who never gave up hope on Bernard who, we find, is with the "Others." Except, who are these "Others"? They are from Oceanic Flight 815, so they must not be the "Others" Rousseau was talking about. Are there other Others? Guess we'll find out, but these Others have certainly had a much harder time than the characters we know. They had 23 at one point and are now down to a handful. Has the sickness gotten them? Or the monster? Guess we'll find out soon.