This episode Locke, Kate and Sayid stumble upon another Dharma station, one that communicates with the outside world and has a satellite. And the person guarding it is the man with a patch they saw from the Pearl station! This man, Mikhail, tells them he's the last living member of the Dharma Initiative. Sayid, however doesn't believe him and quickly realizes he is one of the "Others." Mikhail turns out to be one of the more formidable opponents and isn't easy to keep down.

While Mikhail was lying about the Dharma Initiative, he did mention something that is most likely true: there are "hostiles," as they call them, on the island that have been on the island since long before Dharma. Who are these people, and have we seen any of them yet? If not, and they really do exist, I'm sure they will show up soon enough.

After much fighting, they finally manage to capture Mikhail, but Sayid won't kill him, though the action would be returned in an instant were the tables turned. Sayid is struggling with flashbacks of what he did to people as a torturer, and I think because he wants to be better than he was before, he doesn't want to kill another prisoner. However noble this is, I think Sayid is making a grave mistake. This man can't be trusted and is too much of a wild card, they can't even guarantee they can keep him tied up! 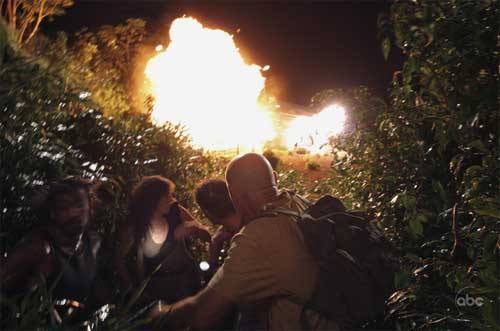 Any use they may have made of the satellite station is gone because Locke was being an idiot again, pushing buttons he shouldn't and blowing up the base. You think he would learn his lesson from messing with the last hatch, but he's got his own issues that drive him to obey every curious thought he has...