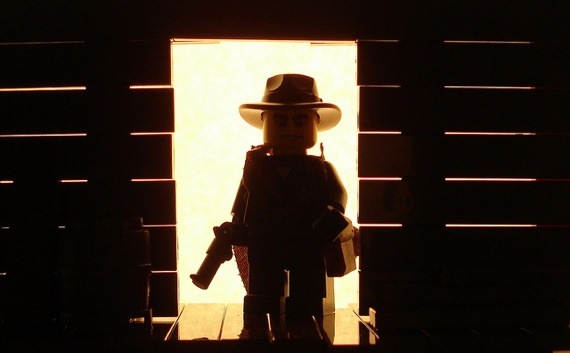 Can you guess where this scene is going?[/caption]

Now that we've spent some time really diving into the story and characters, let's pull back out for a second and look at the film in the context of other films.

As you probably have noticed, a lot of films can seem similar. Whether it's an action film, a romantic comedy, or a western, most films fall into some patterns within their own genres. While you may see this as "cheating" or "borrowing", there isn't really a need to reinvent the wheel every time you tell a story. In fact, some people, like Joseph Campbell, believe that every story actually follows a similar path, no matter what genre.

With this in mind, let's look at how a film fits into its genre, and how it doesn't. Doing this obviously requires having seen similar films before, but for most people, this isn't really a problem.

First, let's look at how this film fits into the genre it's a part of. If it's a romantic comedy, does it fit into the same mold of "boy meets girl, boy and girl are forced apart by their own doing or external circumstances, boy and girl eventually fall in love"? If it does, then we can see how that informs each part of the film. Because it's similar, we know how to interact with what we're seeing, and can really focus on the character's motivations and reactions.

It's easy to see if a film is similar, which also makes it easy to see where it veers off course. Ask yourself what is different about the movie? Where does it not follow the conventions of the genre? Why is it different? Usually it's these differences that point out what the director or writer is trying to tell us about how the world is. If a western ended with the hero having a nice family and home, rather than riding off alone into the sunset, what would that tell us? Perhaps that we need to reconsider our definition of hero, it doesn't require you to sacrifice everything. Then you have to ask, is this correct? Does the world really work this way? Either way, you will be able to ask different questions because of the change.

So when you watch a film, ask yourself,

Have I seen this story before? What is different? What is "new" in the storytelling? What might this particular story be trying to tell me?

Because films have been such a large part of our culture for so long, they are often in dialogue with each other. Apart from genre, see if you can notice any references or similarities to other films. Why might they be connected in the filmmaker's mind? How does that film inform this one?

Also, films can also dialogue with each other about similar issues, though not explicitly. You may watch several films dealing with the issues surrounding war. How does each one treat it differently? What is each one saying? They are connected only by the themes and issues they deal with, but when you compare these films, you can gain a broader understanding of the issue itself by doing the same we did with genre: looking at how they are the same and how they are different.

Watch a film and compare it to other films in the same genre or dealing with a similar issue and write your thoughts in the comments.