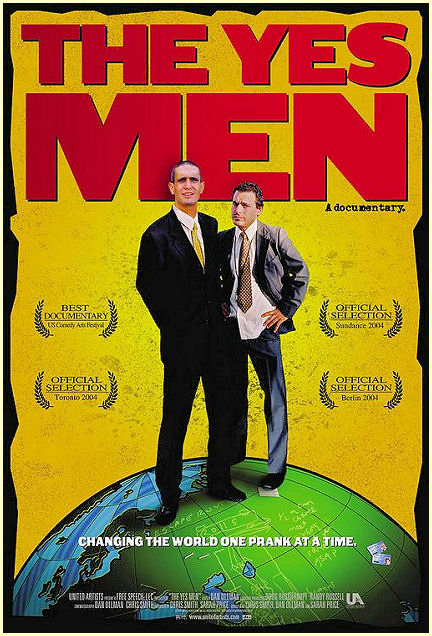 My first exposure to The Yes Men was at Sundance January 2009, where I saw their documentary, The Yes Men Fix the World. I was thoroughly entertained and was amazed at all these guys were willing to do to take down corporate corruption and help create a more honest and caring world, one that isn’t so focused on profit and more on people.

So last night I finally watched their first film, The Yes Men. I must say, I was not as entertained by this one, and their pranks weren’t as extreme, but being as this was when they were first starting out, it is understandable. I must say though, wearing that golden suit of theirs anywhere requires daring!

Needless to say, I really think you should watch one of these films. I would suggest the newer one, as it moves a lot quicker and deals with a lot more material, but either will be an enjoyable experience. Their pranks are a little crude at times, but their point is to shock people, showing them the viewpoints of those in power, albeit a slightly exaggerated view of the truth. They lie to make companies more honest, making fake websites for organizations, getting invited to conferences as the real organization, and then representing the “truth” of that organization to the people and the media. It may not be the most ethical way to cause change, but it certainly is turning heads.

I don’t suggest that everyone follow their methods, but if you want an entertaining look at the problems facing our world today and some people taking extreme measures to fix them, you’ll enjoy these documentaries.