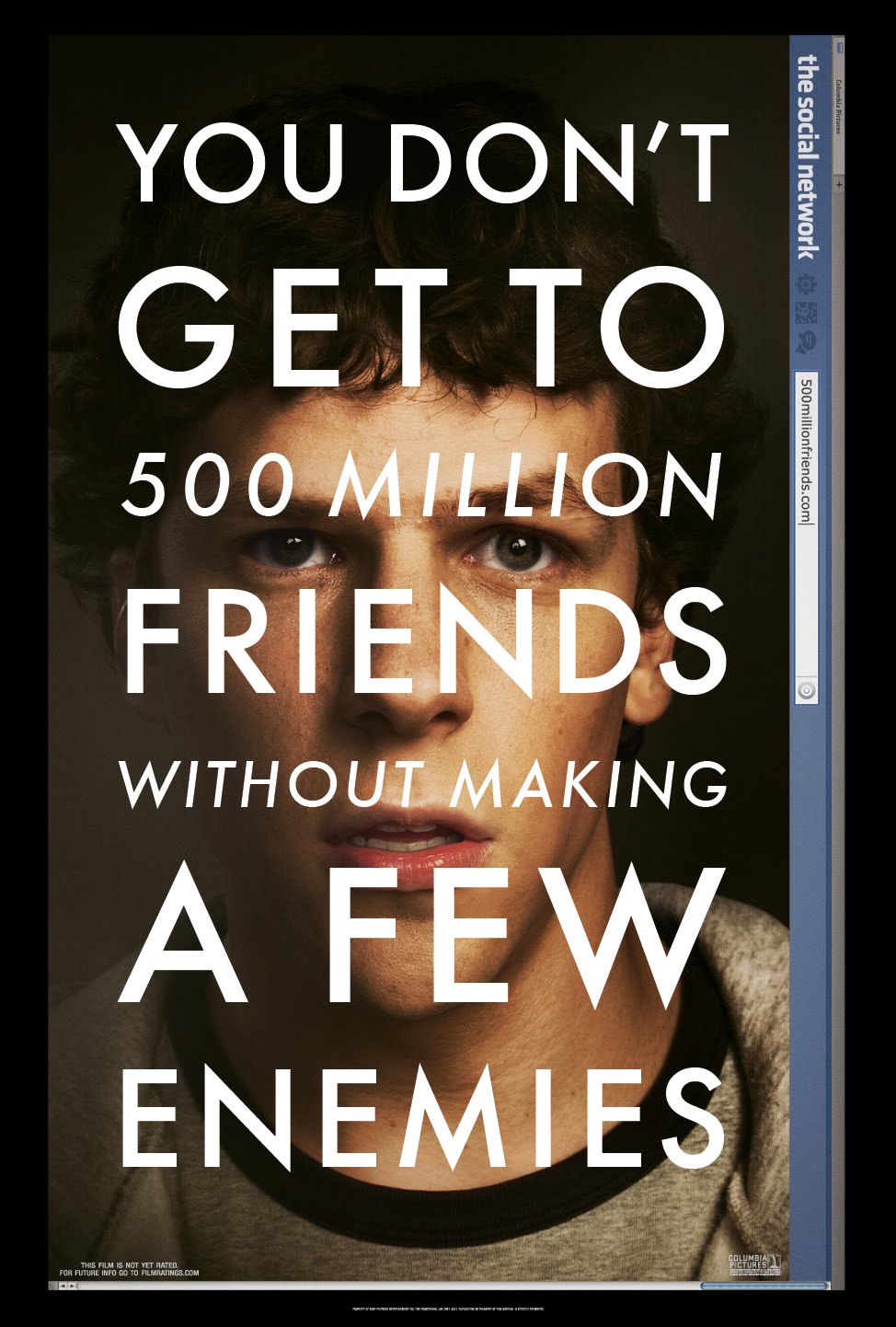 The Social Network is an excellent movie, and if you haven't seen it yet, it's now on DVD, so you should go pick it up and watch it several times. It's worth your time and is an excellent example of quality filmmaking.

It's a very interesting film, if for no other reason than the fact that most of us were involved in some part in the events the film depicts. I can remember when Facebook dropped the need for a college email. I remember when my profile looked like the ones in the movie. This is part of our generation's culture, and the movie resonated deeply with me because of that. You could see the birth of something important, a tale both inspiring and depressing. I left the film wanting to create something, but also left feeling very cautious of who I should work with. I knew that friendships should never be thrown aside by the appeal and attraction of success.

Zuckerberg's character was well acted, showing what appeared in all honestness to be what a genius would be like. Excellent at what he does, beyond the scope of anyone else, and yet not always present. Thinking through 10 different things at once and not always the most aware of those around him. And yet, these geniuses are the ones that create life-changing events.

I realize that much of the tale was dramatized, but it was still a good story, and much can be gleaned from it. Whether or not these were all actual true events, the story rang "true" to life, teaching truth about friendships, success, motivations, and regret. It was not only a literal story to be taken at face value, but a social commentary on our use of the internet and social networks in general, and what it means for us today. It struck me how well each element was crafted, with seeming intention in not only acting and dialogue, but in how the movie was made itself. The film was VERY fast, the hours I spent watching it flew by, and at times it was a little exhausting how much information I was getting bombarded with. Sound familiar at all? Perhaps like the internet itself? The internet is always moving, with more information being funneled to us than we could ever process. The dialogue was so well crafted, at times it felt almost too perfect to be real. And yet this too is how we talk on Facebook. We are able to carefully craft every status update and comment, and though we don't always use that privilege effectively, I think we are much more conscious of the words we place on the internet than we just say when talking with people.

Another interesting part of the film that someone pointed out to me is the boat race in the middle. The way they filmed it, everything looked like it was a miniature, making the Winklevoss' world look very small in comparison with what Zuckerburg was doing. Their actions were no longer significant because Mark had already passed them by. And their portion in the film is also mostly done by that point, their characters just fading out of the story.

The editing of the story was also superb, how the story was crafted between the lawsuits and the events themselves. If the story was told chronologically, it would not have been as exciting, or as effective, placing the climax in the court room decision, and not with Mark alone at the end with no one else. And for a semi-biopic, it also created an interesting dynamic by giving the power of judgment to the lawyers. If we were just left with the events themselves, it would be up to us to decide if the characters' actions were right or wrong. Instead, it gives the accusations to other characters, and allows the filmmakers to frame the story in a way that makes it harder to judge the events that occur as merely black and white issues, and allowing for more empathy in the audience, especially for Zuckerberg.

I certainly left the film thinking he wasn't a bad guy. He just tried too hard to be the "popular and cool" guy, Sean Parker, and didn't realize until too late that being that guy was the worse life choice he could make. It's not until he's faced with how immature Sean is, a man who never grows up and is at a party with people 5-10 years younger than him, that he realizes what a huge mistake he has made by letting himself be enticed by the lifestyle. He loses his only friend before he makes this discovery, and sadly is left with only his mistake and the bridges he has burned, with no turning back. 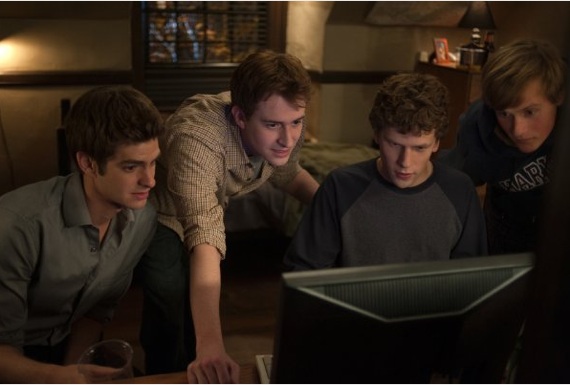 A question this film brought up for me is, what does it mean for today's "social gathering place," the framework for millions of social interactions, to have been made by someone who doesn't have any friends? Is there a danger in a place that  tries to replicate an entire social experience if the person making it can't keep any of the relationships he has? Is this merely a extension of reality, or is it a replacement? I think these are the questions we are beginning to ask ourselves as our lives become more and more saturated with social media, and we need to know how this social networking is affecting our relationships. Are we letting it become our relationships? Though there are benefits, should we also be cautious of something that we can no longer live without?

This film is joining alongside a much larger conversation our culture should be having, and I hope it's wide success will get people contemplating these issues. As we embark into a new era, may we leap with excitement at the new possibilities, but move forward with trepidation in light of what is behind us.