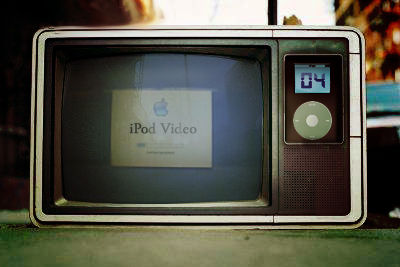 The screens that we consume our media on keep shrinking.

It used to be that to watch a movie you would have to go to a theater and watch it. In many respects, movie theaters haven't changed that much since their start. It's a huge screen with a lot of people. You experience the film with an audience, a group of hundreds of people you don't know, but that you share an experience and emotions with.

For awhile, short films were watched on Kinetoscopes. You may have seen these at a carnival or at Disneyland. They're basically big boxes that you look into to watch the film. This is a solitary experience, and many people were afraid of this viewing experience. Not only were these often found in bars and various "sketchy" places, but there was no accountability in the experience. There wasn't a group of people experiencing it as well.

These quickly faded out fo existence, largely due to the change in the focus of revenue. At first they tried to make their money selling machines, but quickly realized the money was in the films, and so the theatrical distribution method won out.

This changed again when TV arrived in the living rooms of America in the '50s. Now you didn't have to go the theater for entertainment, it was brought to you. However, now this entertainment was brought to very small audiences and was in the living space of a family, competing with traditional activities in the home, even dinner time. It was now possible to watch a seemingly limitless amount of media.

Today, there is a new shift. We receive a majority of our media on our computers and phones. These screens are even smaller than the television, causing the audience to decrease as well. In many ways it is very similar to the kinetoscope: we are watching our media alone, without the accountability of others as we are persuaded by what we watch.

I'm not trying to scare anyone. As I've already said, I love the resource these internet media sources offer. But I do think we need to be aware of our increasing isolation. We shouldn't be experiencing media alone. Like all art, it serves best in community. So we need to discuss the media we watch. It has effects on us, effects that can increase when alone. So let us be knowledgable of this, and seek to be intelligent consumers of our media. We are isolated enough as it is, so let our media unite us together again.