Pinocchio is certainly a great improvement in animation, but also, more importantly, in storytelling for Disney Animation. I was pleasantly surprised to revisit this classic and find that this was not merely a nostalgic viewing from my childhood, but that the storyline was engaging and even emotional. To realize that they started this film while they were working on Snow White, and that it is merely 3 years after it, is just astounding.
It is filled with many classic songs and lots of humour. The group I watched it with couldn't help but laugh at countless lines, especially from Jiminy Cricket! It's a tale of growing up and maturation. In many ways it continues the theme of innocence facing the real world that I wrote about in Snow White. Pinocchio is a blank slate in so many ways, trying to find the difference between right and wrong, with Jiminy Cricket as his guide. He is a true child in need of instruction, but too often it comes from the wrong people. And these people take advantage of the fact that he knows no better! I must say that we were also quite surprised at the films obsession with butts. Seriously, next time you watch this film, count how many times they reference, touch, look at, or allude to butts, and you'll be surprised too!

Pinocchio is charged with the task of being brave, truthful, and unselfish if he wants to become a real boy. This is emphasized several times in the film, and yet, while he does complete the first and the last, we never really see him be truthful. The film seems to posit that his truthfulness is provided when he is stopped from telling a lie at the end by Geppetto. Is being brave and unselfish enough? Does it right the wrongs of lying? Or is not lying the same as telling the truth? The film doesn't really seem to answer these questions, but it seems to imply that one good, saving act can right all other sins. (Sound familiar? I'll get more into it later in this post.)

Perhaps part of Pinocchio's issue with evil is not merely due to his own growth, or Honest John's incessant attempts at steering him down the wrong path. A lot of it has to do with the fact that Jiminy is on his own journey of maturation, discovering what it takes to teach another person right and wrong. He is a bit of a womanizer, often more distracted by a pretty face than helping Pinocchio down the right path. He even gives up when Pinocchio goes into acting, because apparently actors don't have consciences. But in the end, both can help each other; as Pinocchio grows, so does Jiminy Cricket, and they are able to reach their goal in the end. Though Jiminy seems to know what right and wrong is already, he finally learns to teach it to Pinocchio, and Pinocchio finally understands how to listen to his conscience.

Being a tale of right and wrong, it is not surprising to find some biblical imagery thrown in to the tale. There are several allusions in this film, but they all get their own little twist. It adds a lot to the story to find them, but more importantly, it pays off to look deeper at how they are changed and why.

The film begins with what almost appears to be the star over Bethlehem, the night that Pinocchio is created. It is also the night that the fairy comes and gives Pinocchio life, he is "born" and given his mission, and we get the sense that his life will have importance. However, his life isn't important in a cosmic salvation, Jesus kind of way, but it will still be significant. Either way, his character is set up as a Christ figure.

Yet, Pinocchio does not embody his role perfectly. He may be "innocent," but as in Snow White, that innocence merely translates into naïvety, as he quickly falls into sin and temptation. Soon enough, he is trapped in a bird-cage and in need of help. The fairy comes down to save him when Jiminy cannot, but it's an interesting salvation: he only gets this one chance. He is forgiven, and set free, but only this once. It seems that Pinocchio is going to have to truly follow the straight and narrow if he is to become a real boy. He is in so many ways a miracle, and needs to live up to the gift that he has been given. 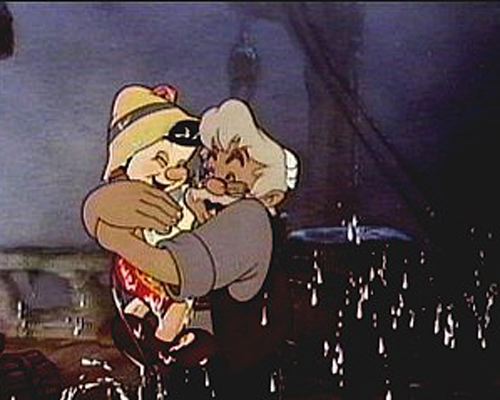 They also waste no opportunity with Geppetto. When Pinocchio never makes it home from school, we see the elderly father racing through the streets in the rain looking for him, much as the father raced out to his prodigal son in the Bible. Even though Pinocchio has left him to pursue fame and fortune, all but forgetting about his father at home, Geppetto will stop at nothing to find him. When they are finally reunited, it doesn't matter to Geppetto what sins his son has committed, he is just happy to have him home. I'm sure if they had a fattened calf, he would have cooked it.

When Pinocchio returns to an empty home from Pleasure Island, a dove descends from heaven with a golden letter informing him of his father's whereabouts. I would be remiss to not point out the obvious symbology of the Holy Spirit. And if Pinocchio is the Christ figure in this tale, the similarity to Christ's baptism is worth noting as well. Just as Christ's baptism marked the beginning of Christ's ministry, so this letter, and the dove descending, marks the beginning of Pinocchio's final mission, and the salvation of his father.

Leaving no Bible story unturned, we then descend into the sea to the belly of the whale. Can anyone say Jonah? It is interesting to note, however, the differences here: it is not Pinocchio, the one who has strayed, who is in the whale; it is the loving father. Pinocchio isn't punished by being put in a whale, but he is thrown into its belly due to the consequences for his sins; his father would not be down there if he had returned home. Just as Jonah was willing to be thrown into the sea to save the ship, so Pinocchio is willing to descend to Monstro to save his father.

Now, I mentioned earlier that it seems as if Pinocchio's last act redeems his other sins, and this is where that part comes in. Pinocchio, in keeping with his role as Christ figure, sacrifices himself to save his father's life, against his father's request. He proves himself brave and selfless, protecting his father from the evil Monstro. Because of his actions, the fairy keeps her promise and not only makes him into a real boy, but raises him back to life. Now, Christ did not die for his own sins, but this imagery is too clear to miss.

While Pinocchio may not have been perfect, this film still shows that there is more to right and wrong than a tally of good and bad actions. It is how we act in dire moments that our true character is shown, and Pinocchio proved himself truly human in that moment: he showed love. For that is what separates us from being mere "puppets" to our desires, doing only what helps ourselves. If we can truly love someone else, even putting their life above our own, we are proven to be truly human, and showing the greatest freedom. If not, we will only make jackasses out of ourselves, and we might as well be turned into donkeys. In that sense, sure Pinocchio has a lot to learn about life, especially telling the truth, but in many ways, we still have a lot we can learn from Pinocchio on what it means to be a real boy.