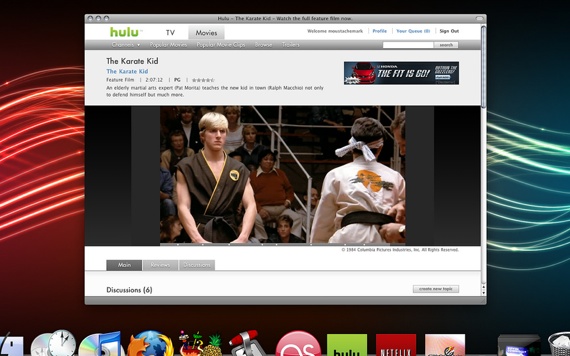 My roommates and I are doing a comparison of Netflix and Hulu+ at the moment thanks to a generous 1 month trial of Hulu+. Yes, it was prompted by Netflix's rise in prices, and no that's not what I'm going to be talking about today.

I've been struck by just how much TV and films to be watched that are merely a click away. At no time in the history of this medium has there ever been so much available to so many in such an easily accessible way. That fact that I can go on Hulu and access the Criterion Collection and watch some of the greatest movies of all time when I want is just mind-blowing! And since we have a Roku box, I don't even have to sit at my computer, I can enjoy it all from the comfort of my living room.

As a recent film school graduate, this really excites me. There is nothing better to learn the craft of filmmaking than getting your hands dirty and working on films as well as studying the classics. Or even contemporary films. But having these in conjunction are amazing, and with the latest advances in technology, anyone with a Netflix/Hulu subscription, a camera, and a computer, can get a pretty decent film education.

But filmmakers aside, I think it's exciting that more people in general get access to so many great films. I realize they have to actually be willing to watch something older than five years old, but if we can get past that, then people will be exposed to some of the most powerful stories the medium provides. Not every film is a remake, and not every film is made for the sole purposes of entertainment and cash flow.

But with all of this available, it begs the question: can we be exposed to too much media? Just because we can have it all at our fingertips, is that a good thing? Will we become numb to the emotional power and connections that films can bring? Or can these "flickering mirrors" expose us to the greater world around us? Film is certainly one of the most popular art forms today, will it's power to change people grow even more? With it being so readily available now, does that require the filmmakers to be even more intentional with their craft?

These are questions I can't answer, but it will be interesting to see how our generation and the generations to follow are affected by all of this. Until we find out though, I say let's be intentional about the media we consume, and perhaps expand our horizons a little. Go watch an old film, be it black and white, silent, or even just older than you. Or perhaps watch an indie film, free from all the restraints of a studio. Experience the art of the past, or the lesser-heard storytellers of today. But don't waste this opportunity to better see the world around you.

What are you watching with your streaming account? Has it broadened your horizons? Comment below and let me know!

(Image thanks to moustache)