Madadayo was a slow-paced, but beautiful and touching look at the life of a professor and his students. The film opens with the professor retiring from teaching so that he can focus on writing, causing much sadness among the students, past and present. They all thought of him as "solid gold," and though he may have stopped being their professor, they didn't stop spending as much time as they could with him. His old students would flock over to spend time with him and listen to all that he had to say. With all of these interactions, you quickly learn both what the professor and the students are like, as well as what is going on in Japan as a whole. though we only see a handful of houses throughout the movie.

Much of the film centers around the professor's birthday celebrations that the students throw every year after his retirement. They are a celebration of life, centered mostly around drinking, and culminating in the question "Ma adha kai?" ("Are you ready?), asking if he's ready to die, and he replies, "Mada dayo!" ("Not yet!"). Every year they ask him, and every year he has the same response.

These celebrations were really moving because they showed how much the professor meant to dozens of people. Not only would they show up, but they all pitched in for the food and drink when things were tight during the war. They all sacrificed to celebrate a man who meant that much to them. 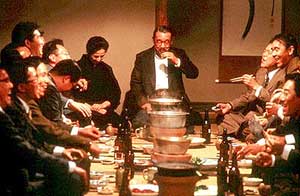 There were also a select few students who would visit his house quite frequently, and these scenes were perhaps the most moving ones of all. Often they were filled with laughter since the professor had quite a way of making just about anything humorous, but there were also many sad moments as well. Yet through it all, these students stayed. And they would do anything for the professor if he needed help. They all pitched in to get him a new house when his burned down. They all spent weeks searching for his lost cat. And they also went out of their way to help others in imitation of their professor.

This film was a look at life, with all of its facets, and how much better life is, whether times are good or bad, when they are spent with those who mean the most to us. Whether it's laughing at a joke or mourning the loss of a loved one, we need to be with one another. This film also challenged me to invest more in those who have meant a lot to me, especially those who have inspired me. Because relationships allow us to give back to those people, and we are able to show them our gratitude in the most fulfilling way: love.