This episode provides a little more information on the mystery of the island! Sun and Jin aren't supposed to be able to get pregnant, and yet now Sun is. We find from their back story that there was some tension about this issue of children between them before, but thankfully it seems this child will help to unite them as they work to restore their relationship. It's not clear if Sun got pregnant from the other man she was seeing in Korea, or if the baby is from Jin, but if we are to believe Sun, who seemed sincere, then Jin is the father. Perhaps this is another instance where the island provides a miracle, like it did for Locke. Either way, it seems that for these two the island is bringing them closer together and helping them become better as people and a couple. I only hope Sun was telling the truth when the only secret she had was about Jin's fertility! 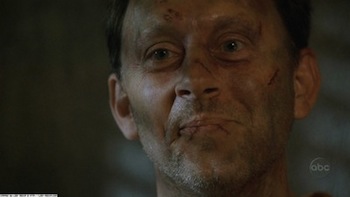 Henry Gale also continues to cause problems in the hatch, and he certainly is losing any trust I had in the man. He seems to coöperate with Ana Lucia, providing a map that will lead them to his balloon, potentially providing real evidence. The episode leaves them without finding it however, and he ends the episode elaborating on a potential plot to capture Ana and company if he were an "Other." His people would capture them and bargain for Henry back. It seems convincing enough, enough to call for worrying for the group searching for the balloon.

But I can't gather what Henry's play is. If he really is ambushing them, why would he tell them now? Does he assume there is enough trust issues between them that he can feed into them by causing more mistrust and worry, potentially causing someone to make an irrational decision? Or is he just crazy and given up on trying to get them to believe his story? Who knows, but I get the feeling Mr. Gale is going to cause some serious trouble, and very soon!