Wow this episode moved fast! In 45 minutes we covered the 48 days from the other side of the island! I know I mentioned it in the previous episode, but now we really know that they had a much harder time than the side of the island we've followed. More people are missing, they landed in the water and not the beach, and they certainly had problems among each other as well. 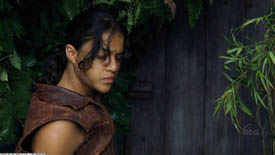 Most of them are pretty likable though. Everyone but Ana. I'm not sure if her trust issues are from before the island, or if the situation just brought it out of her, but she is way too reckless. If you get on the wrong side of her, you better start running or she will kill you, or at least threaten to! She seems like Jack, in that they both quickly arose as leaders and have to have things done their way, but I can at least trust Jack, whether or not I always trust his judgment. I'm not sure I can say the same for Ana, and I think it's largely because she can't trust anyone else. It seems more than the situation warrants, so I wonder if they'll explain why.

We also find that each group had their own spy. Goodwin, like Ethan, quickly infiltrates the camp, but meets the same demise when found out. Goodwin had me fooled for a while though, again because he was more likable, more trustworthy; in comparison with Ana he really seemed like a great guy. Until he started killing people that is. Who are these guys and who sent them? Will we ever find out who the people on the island are? Some of them go barefoot and seem like savages, and then there are people like Goodwin who can totally fit in. How do they all fit together? Again, hopefully the answers start showing up soon. Perhaps it all has to do with these Dharma bunkers, since the other group found one as well. We'll see....