How do we make our choices, out of hope or guilt? Learning the difference isn't easy, and this is a key theme throughout the series, and Claire displays both aspects in this episode. In the flashbacks, we see her choose to keep her mother alive out of guilt, not wanting to face the consequences of her actions and hoping for another chance to redeem the words she wishes she hadn't said.

We also see her channel that into hope as well. She spent hours watching nature shows by her mother's bedside, and now has an idea for their rescue off the island by sticking a note on a tagged bird. Through her experience of guilt she is able to redeem something, providing hope to herself and others.

And this is what we see with others on the island. Jack, Kate, Sawyer, Locke, Sayid, Desmond... they all have dealt with guilt over their various choices made before they reached the island (and some since they've arrived). But it seems the island continues to offer them options to redeem themselves, to work through the pain of their past and give them hope for a better future. 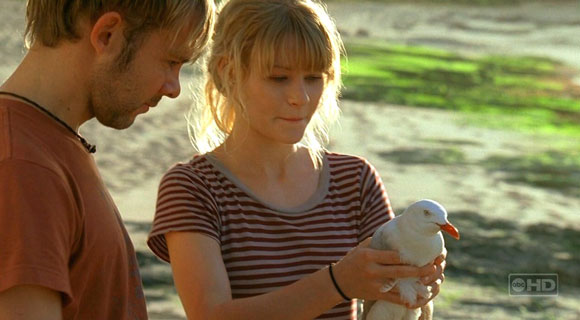 All except one man: Charlie. The island has given him chances to work through his past, but it is stripping him of his future. Desmond is doing his best to keep him alive as long as he can, but we know Charlie's death is imminent. Thankfully it seems that Charlie isn't making his choices based on his guilt, but he's still been robbed of all hope. How do you continue to live when any moment could be your last? It's intriguing to see how Charlie lives his potential last days, many times becoming a better man for it. But in the end, will he be more grateful for what he has? Or will the despair rob him of his sanity and drive him into solitude?

Only time will tell.