This episode is centered around the consequences of taking another person's life. The backstory is Sawyer hunting down Mr. Sawyer in Sydney so that he can kill him. Back on the island, we also have a nice comparison as a boar keeps attacking Sawyer, seeming to personify what haunts him: his need for revenge and regret for what he has already done in his revenge. We also have Charlie struggling with killing Ethan, even causing him to become distant from Claire, the person he killed Ethan to protect in the first place.

The man who sells Sawyer his gun in Sydney tells him that when you look a man in the eye with a gun, you find out what kind of man you really are. Both Charlie and Sawyer are still dealing with this fact. Sawyer couldn't ultimately kill Mr. Sawyer the first time around. He wouldn't have done it either if he hadn't met up with Jack's dad. Sawyer is beginning to strike me as a man who doesn't automatically do evil, or even desire to, he is just often forced to choose. Unfortunately he often chooses ill, due to his conceived lack of choice and pressure from others expecting him to do the wrong thing. 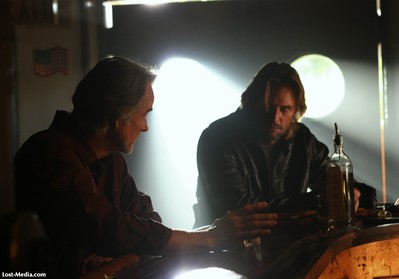 Anyway, he meets up with Jack's dad in a bar, and Mr. Shepherd confides in Sawyer, telling him that Jack did just what he needed most, that he was proud of his son, but was too weak of a man to tell him he loved him. Jack's dad is broken, and while freed from his conscience for one deed by his son, he seems to still be in bondage to many regrets. It's he that tells Sawyer he needs to take care of whatever it is that he came to Sydney to do, or Sawyer's regrets will drive him to be just like Mr. Shepherd: broken, in a bar, with nowhere to go but sit and wish he could change things.

But avoiding regrets doesn't seem to work, as Sawyer ends up being conned himself and killing the wrong man. Now he has a dead man on his conscience and unsatisfied revenge. A lot to deal with. Sayid mentions to Charlie that what he did to Ethan will be with him for the rest of his life, but he tells him he's not alone. They may all be struggling with their past deeds, wondering at the significance of taking another's life yet still feeling justified in their desire to do so. Sawyer lets the boar go, giving up his quest for revenge, realizing killing a man won't make things better. As long as they realize they're not alone, and help each other through this, I think they'll be ok.

Side note: Sawyer is hearing voices in the jungle...what is going on? Is he going crazy? Or are their more people out there? This island has many secrets!