Relationships. I love that they are so central to this show! Sure plot is good and all, but I love watching characters grow, especially with each other. Since relationships are so central to who we are as people, I think a story that is able to portray real and intriguing relationships is set apart and above most "entertainment." These are the stories we remember. And in Lost, I think one of the relationships I remember most, and want to learn the most about, is the relationship between Jin and Sun. Sure it's not perfect, but at the same time their commitment to one another through constant struggles is just different than the other survivors.

But in this episode, it seems that the struggle may be too much. Will their relationship really be ended? Jin is starting to think that something is going on between Sun and Michael and doesn't really seem to trust her much anymore. Why has Jin changed so much in how he treats Sun? What happened to him that he can no longer love her the way he used to? When did his work for her father change him so that he lost sight of the person he was working for? I really hope that there can be some reconciliation! But it seems that finding out that Sun spoke English was too humiliating for him...

Not only is Jin and Sun's relationship falling apart, but relationships in general are beginning to fall apart as well. Hurley is trying to befriend Jin, but just about everyone else is starting to fight. As Sawyer notes, it's Lord of the Flies time. I was hoping this time wouldn't come, but I guess it was inevitable. I hope it doesn't get too out of hand though! Jack is forced to let the fight happen between Michael and Jin; it's sad, but it seems that there is nothing left to do but let these things be solved through violence. But, fortunately, Locke gets them to realize what they are doing. He tries to get everyone to stop blaming and fighting each other, and to realize that there are others on the island that could be responsible. 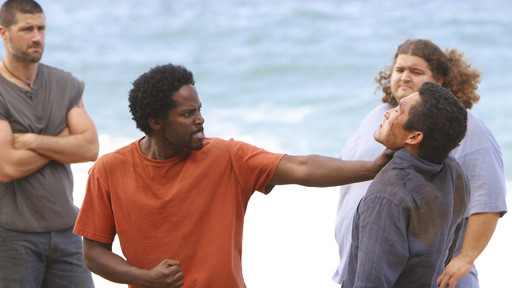 Locke also is a firm believer that everyone gets a new life on the island, and with good cause after the miracle that happened to him! It seems that Shannon is able to start anew, as something is beginning between her and Sayid (never saw that one coming!) But I sure hope Sun and Jin get one as well...though Jin thinks not. What makes him so sure that they are stuck where they are? Why can't they change?

We also find out that it was Walt who burnt the raft because he's tired of moving, and that he likes the island. The island seems that for some people it could be the best thing that ever happened to them, which is a bit of a strange concept. When I think of being stranded on an island, it usually isn't with positive connotations!

The ending, too, is full of themes. Sun is free as she walks to the water in her bathing suit, free of Jin's harshness, though she also seems a little pained to be away from him. Jin and Michael overcome their differences and begin to work together on the raft. And Hurley gets a comical ending as the music just stops because his batteries died. I wonder if we'll be having any musical montages at the end of episodes anymore?