Once again we face Kate's incessant need to run, both from hard situations and those she loves. In this episode we see that often she runs when she has to face part of herself she doesn't want to. We see two stories of Kate doing just about anything for the person she loves, but in the end she has to face the facts and decides to run.

She left a man who loved her and married her because she didn't believe that his love was strong enough to handle the truth and because she couldn't settle down. And now the situation is even more difficult because she loves both Sawyer and Jack but she must choose, she can only run away from one. Jack forces her to choose, but for once her indecision keeps her from running.

Who does she love more, and will that be enough to decide for her? Sawyer almost dies, and she would do just about anything to save him, but she also won't leave Jack even though it's Sawyer's only chance of escape. The island is once again forcing her to face her fears, forcing her to choose. 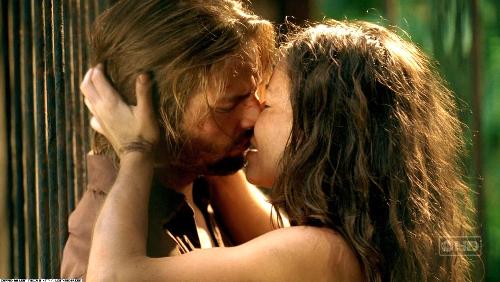 In other news, the group buries Eko, and Locke tries to convince himself that Eko died for a reason. He gets some confirmation in the form of Eko's stick pointing Locke to go north. Whether this is the island speaking to him or not, I'm curious what Locke will find and if his faith has returned now that Eko is gone. If not, the island will be short on believers and I'm not sure that's a good thing.

Jack also completely turns the situation around on the Others by threatening Ben's life to save Kate and Sawyer. Whether his control will continue to carry out is yet to be seen, as I'm not sure they're going to let him go once he stitches Ben up.