In keeping with the spirit of mystery, the last part of the season finale still leaves us with plenty to puzzle over until Season 2! We see more of the smoke monster than before, but it is still puzzling how it works or where it comes from. It sounds like a machine, but it looks like smoke...does it follow our natural laws? Or is it something else entirely? I'd believe just about anything on this island at this point. Locke is certainly afraid of it this time, though when the monster takes him he wants Jack to let it take him into the hole. This goes along with his view in the last episode that the island is always right, that his faith in the island goes even beyond himself.

Speaking of his faith, John and Jack have an argument over their purpose on the island. Locke points out that Jack is a man of science and facts, while Locke is a man of faith. Locke tells Jack that the island brought them there, that it is fate, and that deep down, Jack knows this. Who is correct? Does Locke need a healthy dose of reason? Or does Jack need to open up his mind and heart to believe in that which cannot be measured? I don't think this will be the last time the tension of science versus faith is brought up on this island, so I will stick a note here for when we come back to it.

The raft is found by what seem to be the "Others," and they take Walt? Since we already know that Walt is special, do they also know this and that is why they are taking him? Are they good? They seem to be menacing, but first impressions aren't always what they seem I suppose... Either way, the raft is gone now and everyone is stuck back on the island, kept there by the "Others." 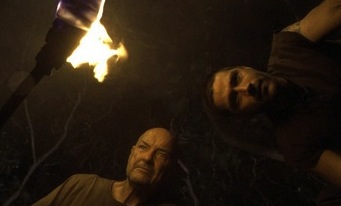 What Awaits in the Hatch?[/caption]

The last scene of the season leaves us with Jack and Locke, looking down the now open hatch. The entrance continues on for some way, and while this new opening does offer something to hope in, we still aren't sure this is a good thing. Perhaps they've opened another can of worms, who knows.

Well, this season sure has been a lot of fun, I'm really enjoying this show! I'm looking forward to Season 2 and seeing where these characters will be and what happens on the island!