Well we're starting to get some more answers in this show! We find out that the monster is a security system to protect the island, although that raises the question of why the island itself needs to be protected. We also discover that the Black Rock is an old ship. How it ended up in the middle of the jungle though is another mystery. The "Others" are also more present, as Rousseau comes to warn the survivors of their impending arrival, and we see their black smoke on the horizon.

This episode's focus is definitely on the unity that has formed among the people stranded on the island. It was heartwarming to see everyone joined together, differences put aside, and wrongs reconciled. These people have been through a lot in the past month or so, and though it hasn't been perfect every step of the way, it is encouraging to see them bond together. Everyone joins together to help the raft set off, their best hope of rescue. Goodbyes are said to those leaving, and even Jin and Sun are able to make up. Jin is going on the raft to save Jin, and sees his time on the island as punishment for the wrongs he did to Sun, punishment he's willing to face head-on for her sake.

In a touching gesture, Walt gives Vincent to Shannon to help her in her grief. Walt also lost someone close, and is reaching out to Shannon, sharing the comfort he found. They are bonded by loss, but are able to rise above it together because of it, finding comfort in each other. 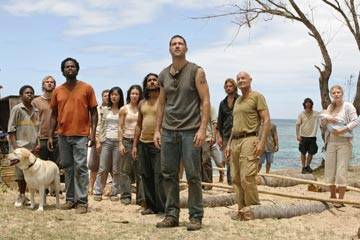 Probably the most surprising relationship that is reconciled, but the most rewarding in my opinion, is Sawyer and Jack. This episode, Sawyer is really seeking to be helpful and do his part. He helps repair the raft after a failed attempt to launch it, even when he's told he can't. And when he runs into Jack, he shares about his encounter with Jack's father. This act seems to reconcile not only Jack and Sawyer, but Jack and his father, as he learns that his father was proud of him and didn't blame him for their falling out.

Times of trial often draw us closer to those who are sharing the experience. We need people and relationships to make it through these times, and it's great to see that, though not all is perfect, the relationships on the island are being forged into deep bonds that will hopefully be helpful during the impending danger to come.