The theme of this episode is finding that which is lost. Sun has lost her wedding ring and Jin, Kate has lost Sawyer, Shannon and Michael are looking for Walt, Jin is looking for Michael and more. Locke is the only one who seems like everything is all right, and it's because, according to him, he has found what he is looking for. He says the way you have to do it is to stop looking. Is this tied to his faith in the island? By putting his faith in the island, does he no longer have anything to fear, knowing the island will offer what he has lost? Or has he just learned not to hold on anymore, to not be angry when something is lost or taken from him? He seems a lot more helpful with others lately, I wonder what is causing the change. 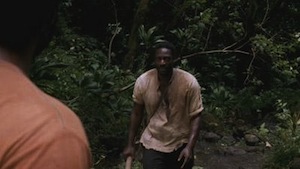 This episode, we also get to see more of Mr. Eko. I really like this guy, he seems to know when to do the right thing, unlike many on the island. And compared to Ana, who I really don't like, he's able to do what is right, not only what is good for himself. I mean, it seems like something has really shaken them all up, but that doesn't mean they can treat each other like crap. Maybe Michael will fit in well with them...

The "Others," from what we are able to see of them in this episode, seem very tribal, slowly walking barefoot through the forest. Who are these people? And did they kill off the other survivors? Who knows, but I'm hoping we'll find out more about these others soon, because I really want to know!