Jack started to get on my nerves in this episode because he has to do everything himself, he has to save everyone. While it's a great thing, he needs to learn to let others share the job as well, his complex is eventually going to get him and others in trouble. He also can't listen to anyone else, as showcased by his struggle with Locke. Locke is willing to at least entertain the idea that there are other people out there, but Jack is not. He has to give everything a scientific explanation. Jack needs to be the doctor and care for Sayid and the others, and needs to let Locke be the hunter and chase after Ethan, but he can't step aside. He has to go after them. Though Locke protests and tells Jack what he should do, he still lets Jack do what he wants. Is he willing to let him learn? I'm not sure why Locke is so willing to let Jack do what is obviously not helpful to others.

The flashbacks in this episode further explained Jack's need to save others, that he can never give up on them. When he's forced to admit that a patient is dead, he has to tell the truth that his father caused her death. What's interesting though, is that when Jack is tempted to let his father get away with it, it is when he thinks that in order to save his father he has to lie about the operation. He only covers for his dad because he has to save him for some reason. But in the end he can't let his father get away with it, and turns him in. I guess at least his issue usually ends up with him doing the right thing! It's not the worst attribute to have, but I think like Jack, while it's good to never give up on a person, it can be bad if we think that we are the only ones who can save them. 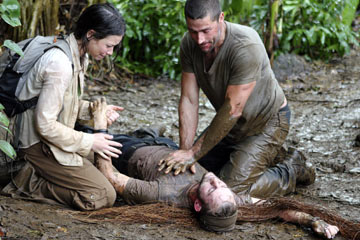 As far as Ethan is concerned, he tries to kill Charlie because Jack is chasing after him, and almost succeeds. But luckily Jack's complex is good this time and he doesn't give up on the seemingly dead Charlie and is able to revive him. His unwillingness to lose someone paid off and Charlie is alive, though he can't remember anything and won't talk to anyone. What happened? How is it that he knows nothing? Is his mind blocking it out? Or did Ethan do something to him?

Other mysteries in this episode include why Walt is so lucky at backgammon. Sure it seems silly, but being able to get whatever rolls he needs does seem a little strange...

And Locke and Boone find some sort of steel plate/door. What is this and why is it there? Looks like I'll be waiting to find out!