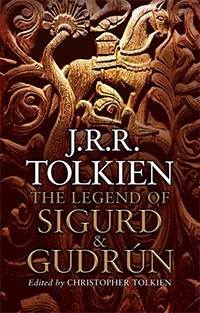 Being interested in Norse mythology after recently seeing the movie Thor, I ran across a work by J.R.R. Tolkien called The Legend of Sigurd and Gudrun. It was posthumously published by his son, Christopher (with many helpful notes and commentaries) and includes two poems, or "lays," wherein Tolkien attempts to unify the scattered tales of the dragon-slayer Sigurd. So no, it's not about the Norse gods (though Odin makes a few appearances) but it certainly provides a deeper understanding of ancient Norse mythology and culture.

And for all you Tolkien lovers out there, he wrote this before The Lord of the Rings, so you can see where he got his inspiration for things like swords that are reforged, magical rings, and even elves!

This is not an easy read. Tolkien attempts to replicate the poetic style of the pieces he is trying to merge in his retelling of the ancient legend. to be honest, without the introductions and commentaries, I would have been utterly lost. But, once you get the hang of it (after rereading many passages) it is a very compelling and engaging tale of love, honor, bravery, and conquest that kept me up late several nights in a row.

But perhaps more than providing me with an excellent introduction to Norse legend, this book provided me with many thoughts of why it is that humans retell stories. Apparently, many manuscripts of these legends have been destroyed over time, and we only have fragments of each left. Many are from different time periods, and offer different versions of the same stories. Tolkien's project was to unify these retellings as best possible, but in doing so he had to retell the legend himself. He had to decide what sort of hero Sigurd would be and what exactly his quests entailed.

And we don't seem to have a problem with this. With legends in general we seem to appreciate a retelling, a fresh twist on the familiar, evoking different concerns or creating different motivations in the hero. Sure, some are better than others, and the truly great ones stand the test of time while others fall by the wayside. It is amazing because we get to interact with the same heroes, but from different vantage points, allowing the hero to inspire and inform much more than he or she could with only one telling.

In fact, we see this today in comic books and superheroes. I can't tell you how many origin stories of Superman/Spider-man/Batman and more that I've read. So much is changed in each, and yet it's still the same hero. In fact, instead of losing sight of the true hero, I gain a fuller understanding of who they are.

Which leads me to what perplexes me: how we treat movie remakes. Why is it that we allow so many retellings of stories in other mediums, but we somehow view movie remakes as "2nd class" or "worse" than the original? Sure, there are exceptions, but on a whole we don't treat them the same. Is it because it takes something more to reach "legendary" status? Does it have something to do with the moving image? Or, for once in our society do we feel that older is better?

Perhaps I'm letting my opinion become too biased by the many terrible remakes out there. In fact, I can think of several good remakes. But I think it's fair to say that we need to allow some freedom for our heroes to be retold for new generations, to encounter new dragons, or at least slightly different ones. And we also need to take the retelling seriously. This should not be done lightly to merely capitalize on a franchise. If our heroes are to live on, let them undergo the fires of retelling, but may we go through those fires as well, emerging as changed as the hero, ready to relive the legends of our time.