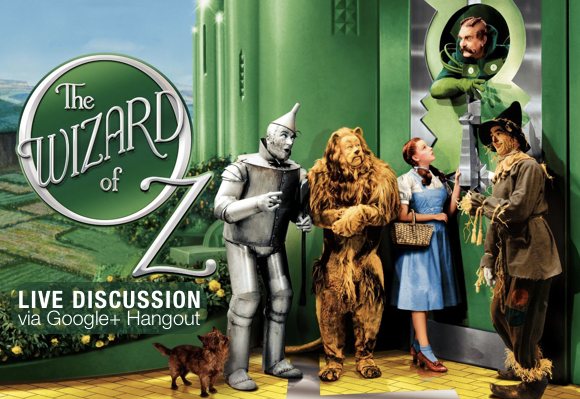 Once again, we haven't gotten to our Man on Wire discussion yet because we had to push it back, but to at least give you about two weeks to watch the next one I wanted to announce that our next film we'll be discussing is The Wizard of Oz!

So head over to the Google+ Event and RSVP for our discussion on March 9 at 10am PST via Google+ Hangout.

I figured the timing would be fitting since the new Oz the Great and Powerful movie is coming out that weekend. If you go see it, hopefully our conversation will provoke some interesting thoughts and comparisons. I know some of you book lovers might say I could have picked a movie that followed the source material a little better, but if the Library of Congress is to be believed, this film "has been seen by more viewers than any other movie." If that's true, the movie is just as canonical as the books in the public eye, and the new film won't be able to escape its reach.

Either way, this film should promote some interesting discussion, and I at least am excited to watch it again! Hope to see you all there on March 9 and look forward to another great discussion!