cs50 pset 5 was all about data retrieval and memory management, so the challenge was to implement a searchable dictionary that could be used to quickly implement a spell checker on entire books (like the Bible or a Tolstoy novel).

Whenever working with data, you're always making tradeoffs between speed and resources. What might be fastest will require more memory, or the solution that requires minimal resources might take twice as long to complete the task.

Since speed was of the essence for a spell checker, I chose to err on the side of speed, so I went down the route of tries. It promised the quickest lookup of each word in a book, but would require more memory.

To give you an idea of what I was building, check out the following diagram: 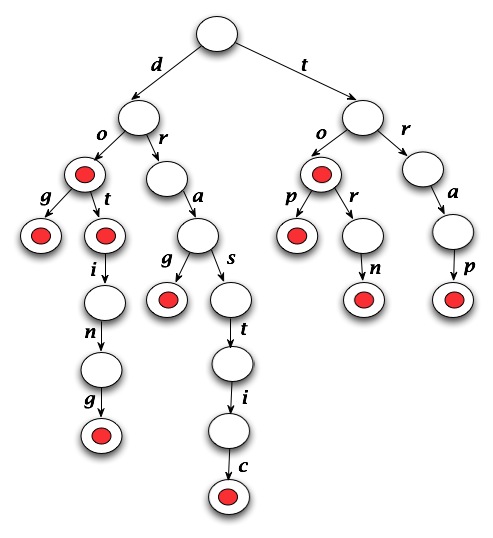 Basically the idea is that each node contains an array of pointers, one for each possible letter. Each word progresses down the tree, letter by letter, and a red dot signifies the end of a word. So, if you're looking for the word "top", you can progress down the nodes and find a red dot.

But if you were looking for "toad", you would discover after your third traversal of the tree that it was not in the dictionary because there is no "a" node under t->o.

So the first step is defining each node as a structure:

Each node contains a Boolean value of whether or not this node is the completion of a word, and an array of 27 pointers to other nodes. These nodes represent the possible 26 English characters plus an apostrophe.

To do this we just do a quick lookup function to find the position of each letter in the array. If it's an apostrophe, we return the last position, otherwise we get the position based on how many chars it is from lowercase 'a'.

Now we take a dictionary file, formatted where each word is on a separate line, and load it into memory.

Obviously with way more words, and then we would load them like so:

Note that each time we hit a newline, we mark the Boolean of the current node as true. Also note that the program is reserving space for a new node at each new letter it encounters, otherwise it keeps traversing the tree.

Check if word is in dictionary

Now that the dictionary is loaded into memory, we can begin to check words given to the program to see if they match or not.

The cursor moves down the tree, and returns whether or not the word was found. If at any point it hit a null pointer, or the Boolean of the node was set to false, then we know it's not in the dictionary.

Once the spell check progress is complete, we need to unload the dictionary and free up all of that memory we used!

It's a recursive function that makes sure all of the children nodes are freed before freeing a parent node, otherwise we lose track of the child nodes completely! Since I went down the route of using more memory for the sake of speed, this is especially important.

Overall this method worked surprisingly well. I was never able to match the speed of the staff's solution, but I was still able to check the entire King James Bible in around a second, which is pretty cool!

As always, for the full exercise, check out my Github Repo.