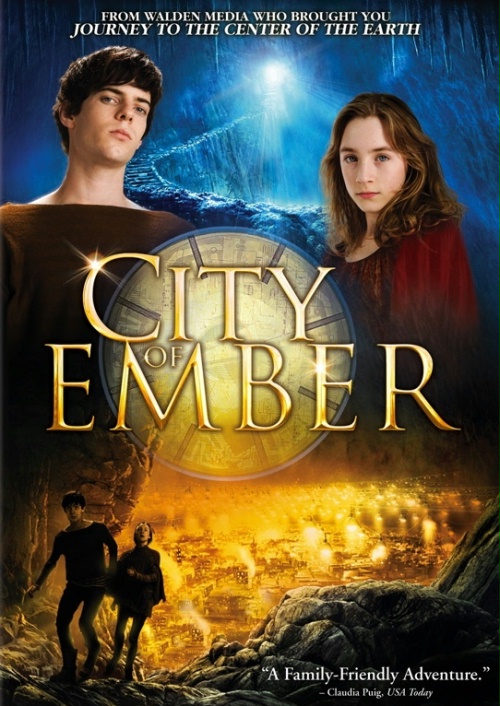 I think I would have absolutely loved City of Ember as a kid! The production design was amazing and the city and world created beneath the earth is exciting and new. Yet, though geared towards a younger audience, this film still has a strong story, connected to one of the most well known works in the Western World.

The story is obviously based upon the Allegory of the Cave found in Plato's dialogue, The Republic. Plato's story tells of a people trapped in a dark cave, who can only see shadows of things but can never know the things themselves. All they know are the dancing shadows before them because they have seen nothing else. This cave is the City of Ember. A city created for the remnant of mankind after some sort of apocalyptic event, they are placed in the center of the earth for a time to be saved. They are given instructions, but these are mere shadows. They live among lies as the truth is lost. To the people in the city, there is nothing beyond the city, they must stay inside for fear of what lies outside and punishment for breaking the laws the Builders left for them. Everyone just does the job assigned to them for the good of the city, ignoring the decaying state of the city around them.

The adults have lost hope. They know death, pain, and sorrow; they have lost all hope. They are either resigned to live in the city and accept there is nothing beyond, or are too corrupt to seek the good of everyone, only seeking their own survival. But as the city continues to crumble, it is up to two children to save them all. Doon and Lina. They are the only ones with a hope and faith in something beyond the city, something better for its inhabitants. By piecing together the lost instructions of the Builders, the true plan for the inhabitants of the city, they are able to escape the city, with it's flickering lights in the darkness, and reach the real light of the sun and beautiful outside world. For the first time they have fresh air over green hills and see a sunrise, and they send a note down to the others in the city far below, giving the knowledge they have gained to the others.

All of this parallels the Cave Analogy, except for one thing: they are missing a guide. In the analogy someone is freed from his bondage but must be forced up to the real world. These children however seek this place on their own and go willingly. They embrace this truth and are able to find their way. They do have a guide of sorts though, in the help of the Builders and the methods they put in place to allow the people to leave the city. If it was not for those before them, the children wouldn't have made it on their own. They had a guide because the way was marked by those before them, hence leading them out of the cave.

But this doesn't account for their willingness to go. Perhaps this is the difference between the adults and the children. The adults in the city would behave more like the people in the analogy, unbelieving and requiring someone to drag them out of the dying city. But it's only the children, still hopeful, who can listen to the words of the builders, who can still hear their desires for something better than the life they have, who are still willing to try to find a better world. Yet, their guide is merely written instructions and leftover escape routes. Though they could not do it alone, they didn't merely walk into the sunlight either. Is the film right in saying we can't get to higher truth without a childlike hope and faith? Or is Plato, requiring a guide to rise from the shadows? Perhaps its both: though we can't make it without the help of those before us who have seen the truth, unless we have faith and wholeheartedly seek that truth, we'll be left behind in the city of lies.