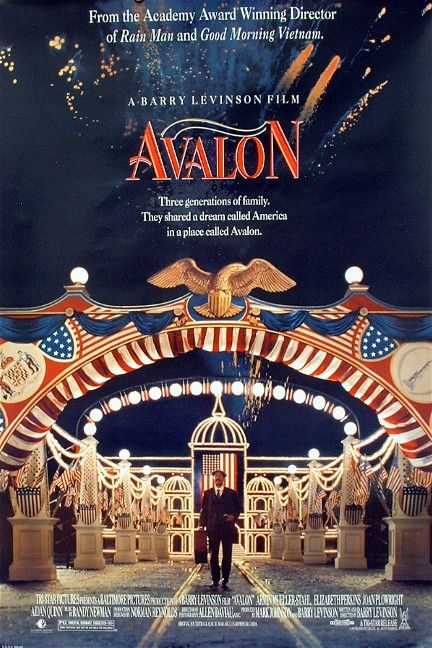 Avalon is a wonderful film looking into what it means to become an American. However, this isn't a fond memory of good old times. It shows how old memories were lost, community disbanded, and the isolation the American Dream provides. It's not a happy picture, it shows what the "perfect" American Dream did to families and culture, but through using snapshots of time, rather than a conventional plot, it allows the audience to experience this change. The lack of a "plot" provided the ability to let us know the family and allows for creative juxtapositions of the change.

As the film goes through the years surrounding the 50s, full of moves to the suburbs , the introduction of the television, and other changes in America, the loss of community is most apparent as time goes on. As the family seeks to become more American, they begin to lose what they value most in the first place: community.

The film often came back to familiar dates over the years, focusing mainly on the American Holidays of Thanksgiving and the 4th of July. During the opening scene of Thanksgiving, Sam, the grandfather, first tells the story of his coming to America, when the entire family is gathered at the house to eat together. He and his brothers talk about their father and old stories of when they first came to America, emphasizing the past.

The next Thanksgiving occurs in the suburbs, and Sam's wife's brother has come to America and his family joins the dinner. Sam decides to cut the turkey before his brother Gabriel arrives, much to the joy of those who always wait for him. Gabriel though is appalled and outraged, accusing the suburbs of causing them to lose the importance of family, no longer respecting the oldest brother,

The next Thanksgiving scene, Grandma is in the hospital, and it shows just their son Jules' family, alone, not even eating dinner at the table, but in front of the television. Suburbia has taken full control over the family. The "family" no longer exists and has been replaced by the TV.

The final scene is of Sam in the nursing home, alone, only visited by Michael, his grandson, who's all grown up. Thanksgiving has gone from a fun family occasion, to a lonely holiday, devoid of human interaction. Both of these holidays start out full of family and stories, and are very important times. However, by the end of the movie, the family is apart and the holidays have lost significance. The storytellers of the family have been replaced by the television.

When the brothers first start out in America. they are wallpaper hangers and musicians, doing what they know to earn a living. But they want better for their children, so their sons become salesmen, and eventually owners of their own department store. They fulfill the dream of owning their own business, living the American dream. But moving up in the job world also brings different values from the previous generations. When the department store is destroyed, Jules decides to go out on his own, the risk was too much working with Izzy. Work is no longer a family affair, but also becomes solitary. He goes on to sell time for television commercials. The job wasn't even there before, and he sells something nebulous: time. But it is that time that rules the airwaves of America, allowing television programming to be funded. He now works for the television, keeping it going, fueling the solidarity of the family.Television now pervades every aspect of his life.

As their tales say, when Sam's father came to America, he was treated with full respect, the brothers give him ten percent of their earnings so that he wouldn't have to work. They value family so much that he can enjoy life knowing his boys will take care of him. They want him to have the best life he possibly can because he is their father, even if that means sacrificing and working harder to provide for him.

However, when Sam is in his old age, he is merely relegated to a nursing home, abandoned and forgotten. Left to himself, visited only by his loving grandson occasionally, he is forgotten and left to forget what little he can remember of the past. The "family circle," the family government that helped decide how to provide for the members of the family, no longer exists, and each member is left to fend for themselves. 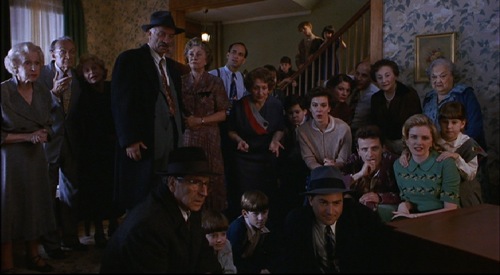 At the beginning of the film, everyone sits around to hear the stories of the past, to hear the older generation share their struggles and where they came from. They talk about the good days where everything was better or different. But once TV came, all people wanted to do was watch TV. Where once the children gathered around grandpa to hear stories of coming to America, they have the TV schedule memorized and know exactly when to run to the television set to hear the latest adventures of their favorite characters. Storytelling is no longer found in the familiar, but in the new.

The family has gone from spending all their time together to being very much alone, spending their time in front of a television. Even Sam in the nursing home has a TV playing while he sits alone. TV has become the families' companion, replacing relatives. It is obviously a bad trade for the family, for the family is lifeless, whether in their bedrooms or living rooms. There is no longer talking or laughing or arguing, or any conversation. There are simply people sitting in the same room, staring at the television. Though this allows the family members to stay away from one another, avoiding arguments and whatever else they don't like about their family, there is no longer any life in the home.

Giving a very clear picture of the issues surrounding the introduction of the television, the movement of the middle-class to the suburbs, and the changing role of family in America, Avalon tells its story very well. Family becomes more limited in scope and loses its importance in the span of a few years. The necessity of family was lessened in people's minds as they began to move farther away to the suburbs and the importance of television surged. Can we salvage this lack of commitment to community or is it already lost? We must try to move beyond our solitary existences in the media and engage with one another. Though there are great stories in the television, we must not forget the storytellers that can inspire us the most if we would just take the time to listen.